This was the first section run of the Bellaire-Puritas neighborhood, which is one of four neighborhoods that make up West Park.

The area was originally part of Rockport Township in the 1800s which then became West Park Township in the 20th century. Cleveland annexed the area in 1923.
Most of the housing is post-WWII. More than 20 percent of Cleveland's industrial activity occurs within the Bellaire–Puritas. Not surprisingly, it has the heaviest concentration of industrial parks in Cleveland. That said, it also has 8 City parks.
After reaching a high of 21,000 in 1960, the area’s population has fallen somewhat, standing at almost 16,000 at the cusp of 2020. Roughly 50% of residents are white, 25% African-American and 15% Hispanic. 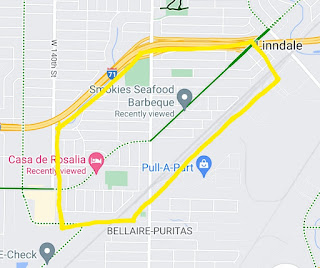